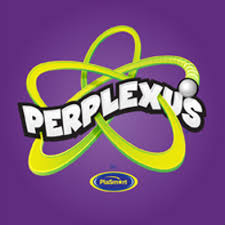 "The concept behind PERPLEXUS was created by 3-D design teacher Michael McGinnis in the late 1970′s as a project for an art class. Michael envisioned turning his creation into a toy. He had no idea this vision would turn into a decades long odyssey to get the game to market. After almost 20 years, Michael met the inventors at KID Group, one of the premier inventing houses in the toy industry. They collaborated on the design to make it more suitable for consumers. It was finally ready. The original product was marketed as Superplexus.
Through many twists and turns in the toy industry, Superplexus got tangled up in some changes and ended up being shelved just as it was getting started. But that isn't the end of the story...
In 2008, a group of enthusiasts contacted KID Group about licensing Superplexus. Perplexus, LLC acquired the rights to Superplexus and launched PERPLEXUS in its current form."

FLIP! TWIST! SPIN!
Master the challenge of the crazy, fun world of Perplexus! Inside the Perplexus Original you'll face 20 feet worth of challenging twists, turns and obstacles! Flip twist and spin Perplexus to move the ball along the numbered path. When you fall off the track (Yes, it will happen!) head back to the start and try again. There are multiple levels of difficulty to master! Try the Perplexus Rookie and Perplexus Epic. They're easy to play, but hard to master. It's a bendy, trendy, can't put it down challenge!